Musina, South Africa
No Reviews
$820
From price per person per day

Location: PJ Safaris is based in Musina and operates throughout the Limpopo Province of South Africa on hunting lands stretching well over 200,000 hectare.

Location: PJ Safaris is based in Musina and operates throughout the Limpopo Province of South Africa on hunting lands stretching well over 200,000 hectare.

About your host at Pj Safaris: Piet and Eugene Jansen, Owners. PJ Safaris is a hunting company, owned by Piet and Eugene Jansen, who have been involved in the hunting activity their whole life. From a very young age, Piet and Eugene were told to respect nature and everything within it and by spending vast amounts of time on their grandfather’s farm shooting birds, they discovered the love for hunting and by hunting they learned how to conserve and manage the nature around them.

­­­­­­Hunting experience at Pj Safaris: Our hunting territory is a mixture of savannah land, bushveld and mountain/rocky area. The Limpopo Valley is known as one of the most beautiful parts of South Africa. This is our main hunting area, situated only 8km from the Limpopo River which borders Zimbabwe. Within this area PJ Hunting Safaris have exclusive hunting rights on over 30 000ha. These areas host mainly Plains Game, Leopard and Sable. With other predators roaming around free such as Hyena and smaller cats. This area is well known for its very Big Kudu Bulls and also Eland, Waterbuck, Nyala and Bushbuck. With over 30 other species of game animals roaming within these areas. PJ Hunting Safaris offers Rifle, Bow/Arrow and Handgun hunting, and have extensive experience in guiding and guarantee you as hunter to do our very best to take you to the best trophies. Click here for quick link country guide.

What are the fishing/hunting seasons in Limpopo, South africa?
For the most up to date information on seasons, please check with the relevant local authority.
Jan
Feb
Mar
Apr
May
Jun
Jul
Aug
Sep
Oct
Nov
Dec
Zebra

Pj Safaris is located at Musina, South Africa
Pricing
Price From
$820 From price per person per day

While staying at the Lodge you will have our whole staff crew fully dedicated to make your stay with us as pleasant as possible, from the daily laundry service performed by our room service team, to the African game dishes cooked to perfection by our gourmet chefs. As this camp is based within a hunting area, you will be able to start your hunting outings on foot. Click here to view  your accommodation. To select and book the top suggested hotels and accommodation in the area when hunting at Pj Safaris, click here.

by car or public transport to Pj Safaris.

What to wear in Musina, South Africa

for tips on the best clothing and dress code.

To read more about permits or travelling with your sporting equipment.

Why not have your adventure filmed by Eagle Review’s professional videographer? Capture the magic of your visit with our on-location video. It's the next best thing to being there! Have a look at some of our video’s here.

Other Things to Do in Musina, South Africa

for this trip: top things to do near Pj Safaris

Clients/Reviews
Pj Safaris is a bucket destination for (0) travellers 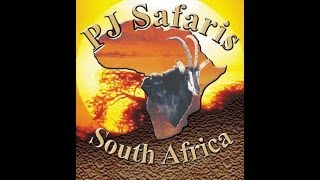